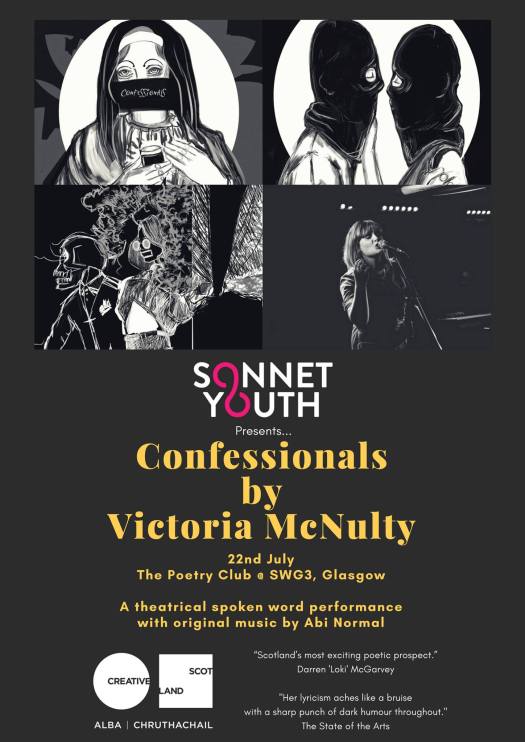 As Jim Monaghan said in this post, it’s not easy to quickly put a response to Victoria McNulty’s spoken-word theatre show “Confessionals” into words. I’ve tried once already – and this is me, trying again. The first go was too ‘review’y’. “Confessionals” doesn’t want a review (Spoiler: It’s good, “so fucking good in so many ways”), it demands a response. It needs you to go away and think about what you’ve seen and work out how you feel about it. So, this is what I think – or, maybe, this is what “Confessionals” has made me think about.

I liked “Confessionals” but it didn’t leave me at peace afterwards. So, I want to get to the bones of what it is that I liked about it. Saying, I ‘enjoyed’ it wouldn’t be quite right. In its fifty-odd minutes, “Confessionals” cycles through abuse (“Smashed. Against the coffee table glass”), guilt and self-recrimination (“the first time he begged me to come back/My face puffed purple/A tear in his eye/I felt he was the most passionate man alive.”), before finally arriving at a place of redemption and peace. There’s the odd moment of budgerigar/crisp related levity but, for the most part, “Confessionals” isn’t an easy ride.

In an interview with GUM – Victoria’s said that, when she came to write “Confessionals”, she –  “wanted to write about domestic violence from a working class woman’s perspective as I feel that’s sometimes a conversation that is lacking when the subject is broached“. Thinking about this made me realise that – for me – what “Confessionals” really is, is a war story – or, at least, a poem about the victims of war. In the words of Leonard Cohen –

“Confessionals” opens with a recording of  Bernadette Devlin speaking to journalists in 1972 – after she slapped Reginald Maudling, the Conservative Home Secretary – and goes on to reference the IRA’s bombing of Bristol in 1974 and the 2004 Madrid train bombings – all of which serves (as this excellent review, in the Herald, has already said) to make the point that one of the outcomes of state violence is to normalise violence in other contexts – particularly, in this instance, in the the inter-personal context of the relationships between women and their partners.

In January this year, I saw Victoria work an extract from Wilfrid Owen’s “Dulce et decorum est” into another one of her poems – so I hope I’m not horribly overstepping the mark by suggesting that “Confessionals” and the likes of Owen’s war poetry share some similar drives.

Firstly, there’s a shared desire for honesty at all costs. Owen’s poetry adhered perfectly to Voltaire’s adage – “to the living we owe respect, but to the dead we owe only the truth” – and “Confessionals” treats the victims of abuse with the same respect.  Secondly, both “Confessionals” and Owens’ work recognise that there are no winners in conflict, only victims. But – in keeping with the need for honesty – there’s no easy victimhood either.

In Part 3 (“Confessions”), the narrator rakes over the embers of past assault, ending each reminiscence with the words, “I liked it”. This message of complicity and of guilt runs through the whole piece – you have to be guilty, to have something to confess – but, guilty of what? Of wanting love? There are no easy answers.

Once the narrator has made her ‘confession’ – she’s spurred into decisive action and  – finally – it feels like peace has broken out. The last lines, “She finally/Feels like home”, show a rapprochement between the narrator and the city of Glasgow and give the audience a sense that – while no-one’s walking off, hand in hand, into the sunset and a bright future – a victory has been won. And that’s important.

But the reality in Scotland is that reported instances of domestic abuse have stayed horribly consistent at around 58-60,000 cases per year. That’s a town the size of Cumbernauld populated solely by victims of abuse. Every year. The truth is that “Confessionals” isn’t one woman’s story but many women’s – and that’s something we’re all complicit in, to some extent.

The poem holds a mirror up to its audience and asks them, “Is this the way you see yourselves?” I think we all want the answer to that question to be, “No” – but I also think we all know it’s not as simple as that. And it’s that complexity –  that refusal to be satisfied with anything less than the whole messy, contradictory, complicated, unhealthy, bloody truth – that, I think,  makes “Confessionals” “so fucking good in so many ways”.

One Reply to “Confessionals by Victoria McNulty”